Melissa sent a note to 7 of us still considering another year of a Dozen Quilters...and like she mentioned, I proposed that we do a Round Robin.

I must admit I have been giving this idea some thought for months now, but then I saw Old Red Barn Co on flickr floating the idea and I really wanted to join in...but the idea of joining in with complete strangers worried me.  I want a group of people I know and trust to stay on track.

This is how Dana describes round robin for any of you who are unsure:

1) A round robin -- depending on the number wanting to participate we separate into groups and do a traditional round robin. Let's say 6 in a group. Each of those six makes the center block for their own quilt. Then that center is sent around to each of the other six and each of the six adds a round to that center block. So you start with the center (your own), it is sent to person number 2 and she adds a round . . . around the center block . . . then sends it on to person 3 and so on. So if there were 6 people in the round robin group then it would run for 6 months and each month each person would be adding a round on someone's quilt.


So, I thought maybe we can brainstorm some guidelines for our own round robin.

How big should we start with a center medallion?
how wide should each round be?
what time frame should we give ourselves to do each round?
should we send fabric along with our medallion, or have each of us use from stash?
Am I forgetting anything important?

I propose we start after the holidays.
Posted by Jenny at 6:45 AM

I'm pretty sure there is just six of us, Jenny, so it should work out perfectly.

Sounds like you guys are going to have great fun.

I would think the person who starts the center would want to determine the size she would end up with - and if she wanted a particular color used, she should send a swatch to each person.

that is a thought Patty...i kinda thought we might just all end up with the same sized quilt. each of us send off a center at the same time...

For what it's worth, I would have each person's center block dictate the rest of the quilt. Surely we can let other people make decisions, while we would take clues from the center when we make the borders. That way, it will be a big surprise when we get it back! But I'm definitely open to other opinions.

All sounds good to me! Are we going to post pics as we go along, or wait to the very end (aka: surprise!)?

i think we might want to show some things that we like...like a mosiac of sorts...but i think it would be fun if the final product would be a surprise to each of us.

Do you think one month is long enough to have the project and then mail it on? We will need to be very diligent keeping on track with sewing and mailing so as not to get off track.

I think starting after the holidays would be great. I only participated in one of these before (and I haven't received my quilt top back yet) but I think we should be clear about how much additional fabric (if any) we should send along with our packages. I think I sent out too little last time I did one of these.

good input Hollie. (aaahh! why havent you received your top back yet????)

I might be using solids, and just letting everyone contribute from their stash...but if there are fabrics you really want in your quilt top, I guess you may want to send fabrics along....

do we officially have 6 people interested in Round Robin?

would you mind if we started on February 1st, instead of January...I simply won't have time to do my middle section before beginning of January.

any thoughts?
anyone suggest better timing?

Just read about your round robin activity. I would love to take part in something like this. sounds like lots of fun! I have participated in a couple of online quilting bees and really enjoyed that.
I am a self taught quilter but I have made lots of quilts and I am learning so much since I started blogging. 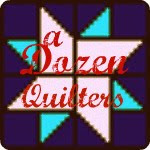